How to get to Overseas 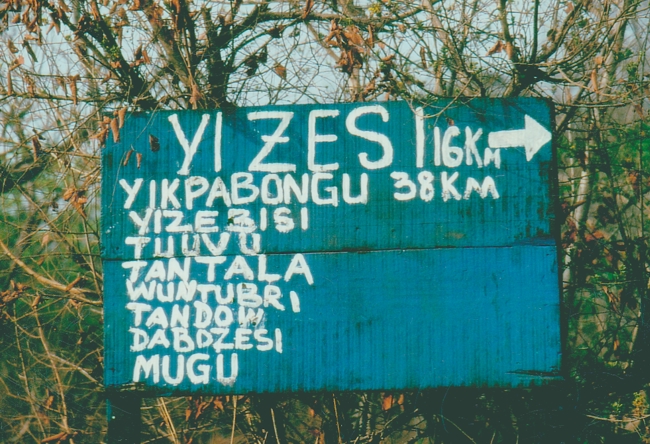 Overseas? Does it mean the New World beyond the Atlantic Ocean? No! Overseas is the (nick)name of a dozen villages in the southeast area of Bulsa District which, at least in the rainy season, were hard to reach by ordinary means of transport. Included are not only the six Koma villages (Yikpagongo, Nangurma, Senta, Wuntobri, Tantuosi and Bayeba Tiging) but also some Mamprusi villages like Yizesi, Tuvu, Mugu, Tantala and others.

The most difficult obstacle for visitors to overseas was, until 1993, the unbridged Sisili River. Only after building the bridge to the south of Wiesi and bulldozing some tracks did regular visits throughout the year became possible. The progress of overcoming the former inaccessibility will be illustrated using the author’s attempts between 1981 and 2011. 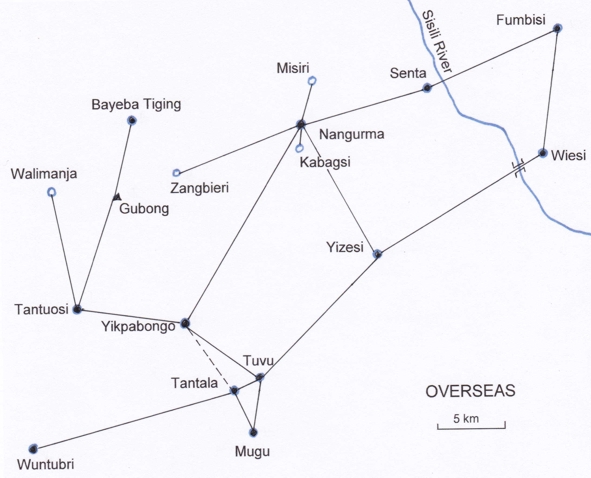 Before 1981 I had heard about the marvellous old terracotta figures discovered in Yikpabongo and other sites and was even shown some of them in Wiaga-Zamsa. In June of 1981 I started from Sandema-Kobdem on my own mobylette with Peter Wangara, who had been in Yikpabongo before, on the back as a passenger. In Wiesi, Leo Amoabil, then chief of this village, showed us the best passage for crossing the Sisili River. Two old women who were fetching water there offered to carry our Mobylette through the breast-deep water while Peter and I walked and swam to the other bank where a narrow footpath led to Yikpabongo. At every fork of this path we were at a loss about whether to choose the right or left one. A farmer on his bush farm showed us the way to Yizesi, pointing into the opposite direction of our hitherto pursued tour. For long distances we had to push the mobylette, and once we were even forced to cross a rocky ridge, handing the mobylette from lower to higher spots.

Seeing the houses of Yikpabongo was indeed a great relief, and the hospitable inhabitants tried to do their best to make our stay pleasant and successful. My own problem was that I had taken only one bottle of water from Sandema and that I did not dare to drink the brown water from the well or river, for there were no boreholes at that time.

After a night of rain showers, we started our way back to Sandema. However, the previously dry and solid parts of the footpath had become muddy. Still, to make a long story short, we reached Sandema safely. A few hundred metres before the guesthouse of the Presbyterian Mission (then my residence), the engine of our mobylette died. The tank was completely empty, and we had to push it.

My second visit to Yikpabongo (in 2001) was far more comfortable. Together with Anne Schwarz (now Dr and lecturer at the James Cook University of Cairns, Australia), we crossed the newly built bridge over the Sisili River and went on over tracks which could easily be managed by our four-wheel-drive car. In the late afternoon, we decided to visit the old abandoned settlement of Gubong. While approaching this site, the countryside became more and more wooded. Then the hard splinters of a snapped tree slit open the right front tire. “No problem,” said the driver, but then we saw that the right back tire had also been destroyed. We had to leave the car and, loaded with heavy luggage (including one punctured wheel), we started a six-kilometre route through the forest. In complete darkness we reached Tantuosi (Komaland). Serious problems (like ours) are not rare in Africa, but for every problem people find a solution. A small Tantuosi boy cycled to Yikpabongo and after some time Konlan Kpeebi, a GILLBT Bible translator, picked all of us up in his car. On the next day we were again in Wiaga, then our residence. 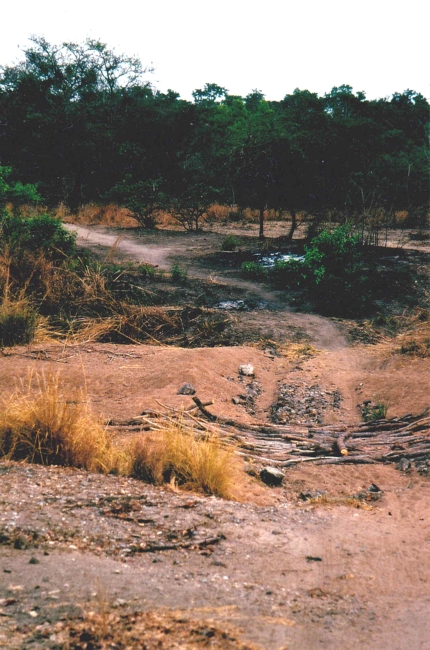 In the following year (2002) as well as in 2005 and 2006, a car belonging to the Sandema District Administration took us to Yikpabongo and collected us again at the end of our stay. In 2005 and 2006, when I was accompanied by Yaw Akumasi, my Bulsa assistant, we packed our bicycles on the back of the pickup. In this way it was possible to visit Nangurma, Tantuosi, Bayeba Tiging and some abandoned sites (e.g. Zangbieri, Kabagsi, Misiri and Walemanja) on our bikes. A GPS instrument helped us mark all of these abandoned places in the still very incomplete and partly wrong official maps.

A revolutionary step forward in improving the accessibility of Komaland happened after gold had been found near Nangurma during or some time before 2005. Thousands of young people rushed to the gold camps, most of whom returned home after some disappointing years.

Some years later a direct bus line Bolgatanga - Nangurma was established. The shortest way to Nangurma would have been the route via Fumbisi and Senta. However, at that time the upper course of the Sisili River had still not yet been bridged. Therefore, a long detour via Wiesi and Yizesi had become necessary.

In 2008, Yaw and I chose this means of transport. Some days before our planned journey, we bought our tickets at Bolgatanga and were asked to wait for the bus in Wiaga after 6 o’clock a.m. After nearly 14 hours of waiting, the bus picked us and our bicycles up and, although it got stuck once in the sand, at midnight we reached the gold camp, two kilometres from Nangurma. It was our good luck that we had our bicycles and that Yaw, a former gold-digger at this camp, knew the way.

After our stay at Yikpabongo, we made up our minds not to go back by bus but to cycle the whole way via Nangurma and Senta to Fumbisi. The route, full of obstacles for a car, proved to be quite agreeable for cyclers. From Nangurma the 11 kilometres to Senta and the 13 kilometres from Senta to the centre of Fumbisi were covered without any problems. 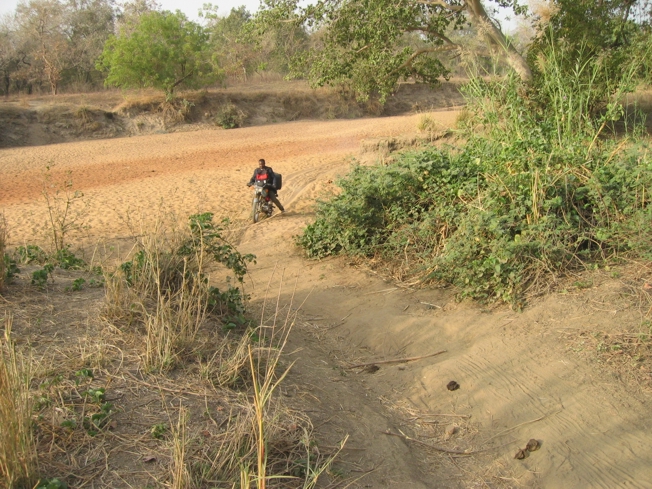 For 2011 I had planned to repeat the tour via Senta when, at my arrival at Wiaga, Yaw welcomed me on his recently bought (but not brand-new) motor-bike. Although we were forced to make short pauses whenever the engine became too hot, we reached Wiesi in a relatively short time. The track between Wiesi and Yizesi, however, seemed to be worse than ever, and it took all of Yaw’s energy to get the motor-bike through or out of the deep sand.

In order to take advantage of being motorized, I fulfilled my old plan to visit some Mamprusi villages with a Koma minority, namely Tuvu, Mugu and (without interviews) Tantala. Perhaps it was only my very subjective feeling that the tracks crossing the boundaries between the Upper West and Northern Regions are in very bad shape (e.g. Wiesi - Yizesi, Fumbisi - Kategra, Kadema - Kunkwa), for we had no particular road problems on tracks and footpaths leading to the above-mentioned small Mamprusi villages. After our bad experiences with the Yizesi track, we returned to Wiaga via Nangurma, Senta and Fumbisi.

In 2011 a new problem for travellers arose with the increase in armed robbery, especially on footpaths and tracks in remote areas. A group of market women had been robbed on the footpath between Yikpabongo and Nangurma, and one of my Koma friends who wanted to buy a new plough from the money he had earned by doing some work for me was robbed by three armed bandits between Sandema Centre and Kobdem. In Yikpabongo we were told not to mention the day of our departure, which meant that we had to leave the village furtively after saying good-bye only to our best friends.

It is possible that the accessibility to “Overseas” will be improved again in the next years. The preparations for building small bridges over the deeply eroded streams between Wiesi and Yikpagongo have already begun. The archaeologists digging for artefacts in Yikpabongo and the miners digging for gold in Navrongo may function as pressure-groups for overcoming the overseas status of Komaland. 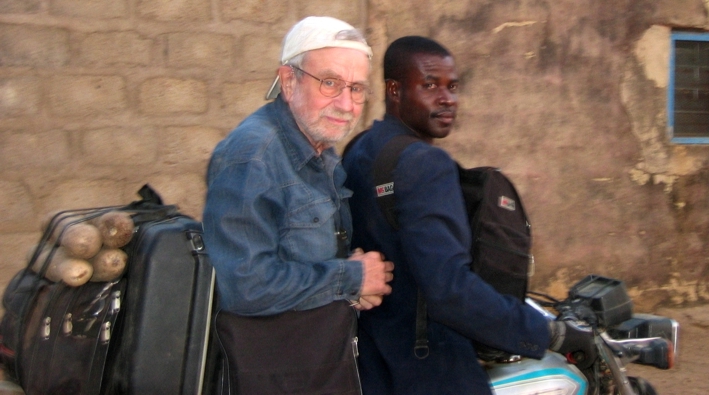