Gold-Mining in the Koma Area

Drastic changes within the Koma area have taken place since 2006. Miners returning from gold mines in Obuasi and Abosum (Southern Ghana) and thus having a good knowledge of minerals, discovered gold bearing rocks within their own tribal area. In a very short time a gold rush, involving not only Koma people, but also prospectors from the whole of Northern Ghana and even from other West African countries, began. 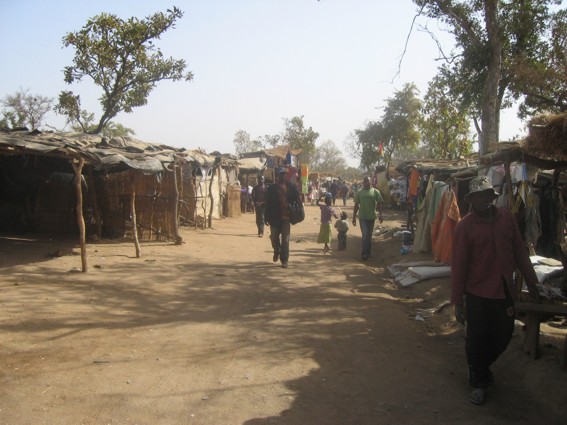 Today, the gold diggers and their Koma hosts distinguish between three goldfields: Nangurma, Kabagsi and Tanyieliŋ. An outsider would perhaps regard Nangurma and Kabagsi as one gold camp, for the two are only separated by the River Bahamboifu (10° 84' N; 1° 29.75' W; h= 161 m at the ford). Nevertheless, there seem to be some functional differences between the two. Nangurma gold camp, situated about 2 km east of Nangurma village, has the character of a big market. Mines and simple shelters can be found mainly on the periphery of the commercial centre. The goods are offered here on a daily basis and not according to the usual market cycle. The central facilities, e.g. a transmitting station for mobile telephones with a small communication centre, a private health station, some drug stores, a video cinema and a bus station, are better and more numerous than those of Yikpabongo and are comparable with those of Sandema (Bulsa) and Tumu (Sisaala). Several bars offer hot food and/or cold alcoholic and soft drinks, the iceblocks for cooling them being fetched from Fumbisi every morning.

The outer appearance of Kabagsi, situated south of Nangurma Camp, is more characterized by mines, sluices, diesel-pumps and shelters for the miners. 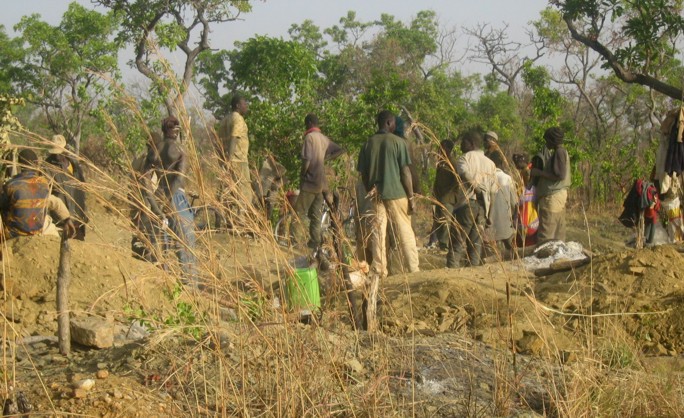 Tanyieliŋ (10° 18.8' N; 1° 33.04' W; h= 200 m), the third gold camp, situated about 8 km north of Yikpabongo, began operations at the end of 2007. There are no market stalls in Tanyieliŋ. Alcoholic drinks, water and soft drinks are sold by one hawker only. Approximately thirty miners search for gold in mines with about twenty shafts (the actual number of mines is certainly much smaller, because most mines have more than one shaft). Around the shafts, there are tip heaps, mining equipment (e.g. iron mortars) and some primitive shelters. Moslem miners have erected a small mosque, an open place demarcated only by stones. On my visit in January 2008 I did not see any women in the camp.

All three mines can be classified as small-scale or, as they are called in Ghana galamsey-mines. This usually means that the miners disregard all official licencing and commercial registration requirements. The chief of a Bulsa village with a mining camp told me that the chiefs are in a difficult position. On the one hand they must urge all miners to register in their regional capital (Bolgatanga), but on the other, they are pleased to see bushland in their territory being developed, people of their own village finding jobs in the mining industry and its farmers offering their products and services to the immigrant workers. The chief’s own authority is increased by his exercising the role of arbitrator and peace-maker in cases of socio-economic conflicts. For particular services he is allowed to collect fees (see below).

Sometimes, however, the chiefs are involved in conflicts themselves. For example, the land of the Kabagsi mining-field belongs to a Mamprusi family in Yizesi, but the Nangurma/Senta chief claims authority over the whole area. When a newcomer wants to start mining he first looks for a potentially profitable site, then makes some test digs and finally contacts the chief who writes down his name. This is regarded as a kind of (unofficial) registration. The fee for it was one Ghana Cedi (approximately one Euro) in 2008. The problem arose whether the chief of Nangurma/Senta was allowed to collect this fee also from miners from Kabagsi and whether he could act as an arbitrator in this gold camp. The conflict was solved by a compromise: The Mamprusi family is authorized to collect the fee, while the chief is recognized as the arbitrator, peace-maker and the person responsible for the maintenance of public order. For the last- mentioned task the chief is helped by a committee, members of which are to be permanently present in the centre of Nangurma Camp.

A newcomer to a mining camp has also to inform the “leader” of the miners about the work he intends to do. This leader is often the firstcomer to the goldfield and as such a miner himself. Also he is regarded as a peacemaker and consultant between conflicting parties or persons.

Having made these contacts, the new miner has to decide whether he wants to work alone in his own mine and try to recruit some co-workers or whether he will join a gang. My Bulsa assistant, who was a miner in Kabagsi before he started to work for me, tried to establish his own mine, but had too many problems with inpouring water. Then he joined a group from the Bulsa village of Gbedema. Although his group consisted only of Bulsa, he does not consider ethnic uniformity as typical for gangs. “Usually you look for people that you need for special tasks and not for your own tribesmen”, he commented. As he had worked in Bolgatanga as a miner previously and had some knowledge about handling dynamite, he was a welcome new member in his team. 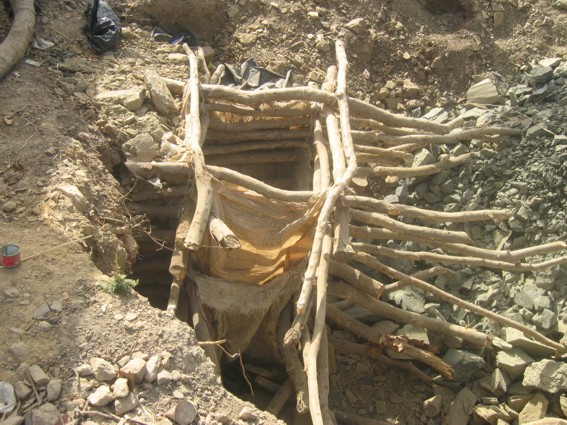 The work of a gang starts with digging a shaft. Especially when there is a danger of collapse or the shaft is very deep, this is lined with wooden poles, or, as the miners say, it is given a “caging”. The horizontal poles are also used as a ladder for climbing up and down the shaft. At the appropriate depth, tunnels are driven into the gold bearing deposits. Now at the latest, the members of the group are attributed special tasks according to their competence, experience and preferences. All the workers are paid in “bushloads”, i.e. one headload of gold-bearing stones being regarded as the unit of payment. Remuneration in gold dust would cause conflicts. Different types of work receive different levels of remuneration.

1) The “chiseller” (see photo), who works in the mine under permanent danger of being injured by dropping stones or even buried alive, earns more bushloads per day than those who work outside. With an ordinary torch strapped around his head,

he extracts stones using primitive techniques. His tools are a sledge-hammer, flat, short and long chisels, a spade, a hoe or pickaxe and a shovel.

2) The “loco” boys (the name is derived from ‘locomotive’) have to transport the stones to the surface. To pull them up the shaft they use a plastic petrol can whose middle part has been removed. Loco-boys earn about half the number of bushloads as the chiseller.

3) The “blastman”, one of the chisellers, is given an extra payment of stones for his dangerous task. Blasting is carried out using dynamite. As the price of safety fuses is relatively high, a short piece is used, which means that the blastman has to move quickly in order to exit the tunnel before the explosion.

4) The highest payment in gold-bearing stones can be demanded by the leader of the gang. He is the one who first tested the land for a potentially profitable mine and recruited the team. His additional money is also a remuneration for his organisation, negotiating with various authorities, caring for injured and sick people and making peace in conflicts. There is usually peace within a gang during the first phases of their work. Conflicts may arise easily over the distribution of stones.

5) All additional services for the gang, e.g. those of the cook who prepares warm meals and the boy who carries water for him, are paid in stones, too.

With regard to the regulation of payment in case of absence or laziness, I received similar information as Thilo Grätz (2004, p. 107), who conducted fieldwork in mining camps of Northern Benin:

...a miner will also get the same share if he has been absent for some time because of an illness or a family affair, while his portion may be reduced if he has been lazy or unreliable.

Processing of the Gold Ore

While the extraction and the transport of the ore is a matter for the whole gang, the processing of the distributed stones is done by individual workers. Mining is a job for men and sometimes very young boys only; females are not even allowed to approach the shaft. The processing of the stones is, however, often carried out by women and girls, often relatives of the miners. They are used to this type of work, for pounding, grinding, washing etc. belongs to the traditional chores of a housewife.

The stones with gold ore have to undergo the following phases of processing:

1) Crushing: The simplest form consists of crushing the big stones with a hammer into pieces of only a few centimetres across. Less outdated, but more expensive is a crushing machine, driven by a diesel-engine. According to my observations there are only a few of these machines in Nangurma/Kabagsi. 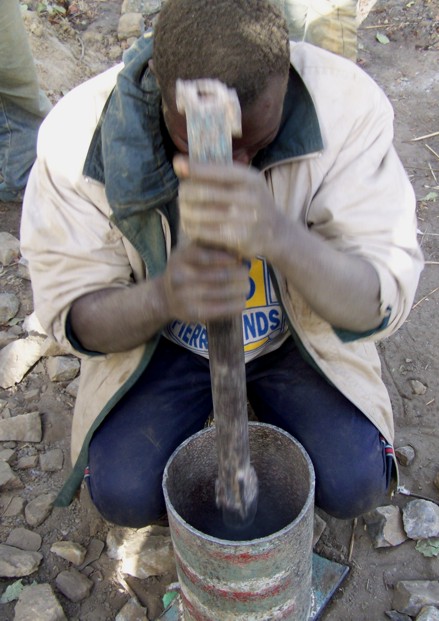 2) The small stones are pounded in an iron mortar with an iron pestle until they have the size of sand grains. Here, too, a few pounding and milling machines ease the hard work of both men and women. The milling machines are usually of the same type as those used for grinding millet (Konni: manika). 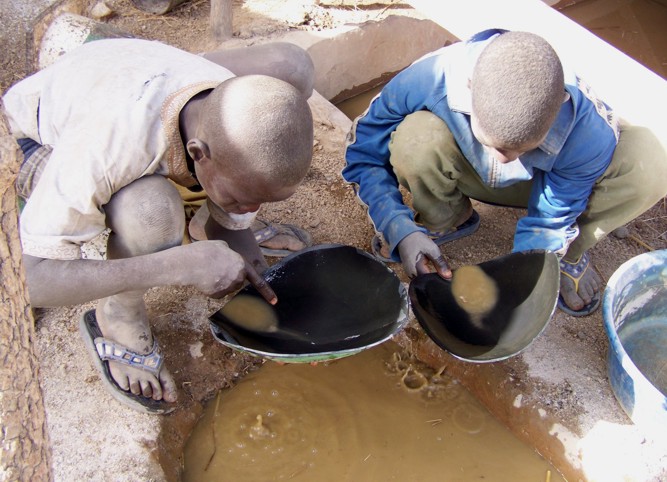 3) Sampling: To liberate the ore from the sand, most miners use a gold pan made from an old inner tube from a car tyre by means of a “vulcanizer”, a sluice or washing table, where the heavier gold grains are separated from the stone particles.

4) Then the gold grains are treated with mercury. Probably all miners know that mercury is a highly toxic metal and inhaling the vapours of the heated mixture is hazardous to health. It may also be harmful to the natural environment by contaminating local water supplies.

5) The small particles of gold are smelted into a ball of pure gold. Until recently mechanical scales with two pans, similar to those used among the Akan for weighing gold dust, were in use. Razor blades served as standardized weights. They have now been replaced by digital scales.

6) The gold balls are sold to authorized dealers who either live in the gold camp or visit it regularly. In Kadema I was told that for one bladeworth of gold the dealers pay about 18 Ghana Cedis (appr. 18 Euros).

Koma gold camps have perhaps passed their peak already. Many miners now go to Kadema in the Bulsa area, because allegedly the rocks have a higher gold content. After concluding our anthropological fieldwork my assistant did not return to Kabagsi but started work in Kadema.

As all the three gold camps of the Koma area are situated away from the villages in bushlands, the influence of the new immigrants and their activities on the host community is not very significant. The outer appearance of Nangurma and Yikpabongo has not undergone a deep change. The higher number of motorbikes and a slight improvement of supply facilities in Yikpabongo (3 stores in 2008 vs. 1 store in 2006) may be due to the general economic upswing of recent years.

Nangurma now has a permanent bus station at the camp and buses run between Bolgatanga and Nangurma every day as soon as each bus is full. Although the bus driver is willing to drop passengers at Fumbisi, they have to pay the whole fare to Bolgatanga, which keeps many people from using this new means of transport. In addition, the irregular bus departure times and its detour by way of Yizesi and Wiesi are of little help for people who want to be at Fumbisi market when it opens.

The only gain for Nangurma, probably a consequence of its more than one thousand new inhabitants (in the camps), is a primary school, whose building was still under construction in 2008.

The new Primary School was still under construction in 2008